Where George was Born and Grew Up

Macon, Georgia is where George and his siblings were born and raised; they were the only Chinese in this town of about 40,000 people back in the 1940s. Their immigrant parents came from China in 1928 and owned the Sam Lee Laundry located in downtown Macon on Mulberry St.  The family lived in two small rooms above the laundry, which were very hot in the summer time from the rising heat from the laundry below, but in the winter, it was a good place to be. 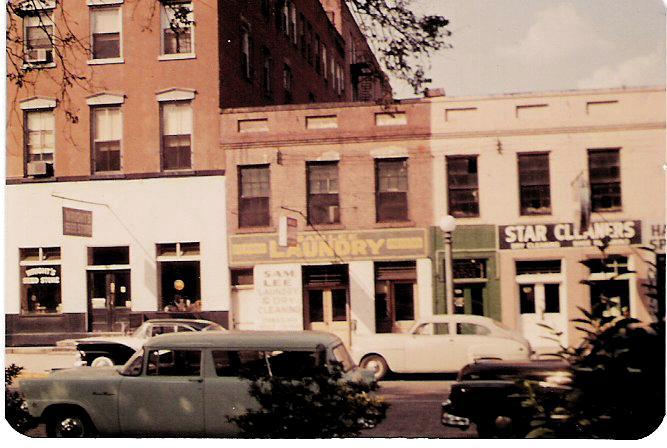 Macon was a medium sized city in the middle of Georgia, but small enough for kids to be able to walk to all the stores and picture show theaters. Below is a photo of Mulberry Street where our laundry was located directly across the street from the tall building in the picture below. 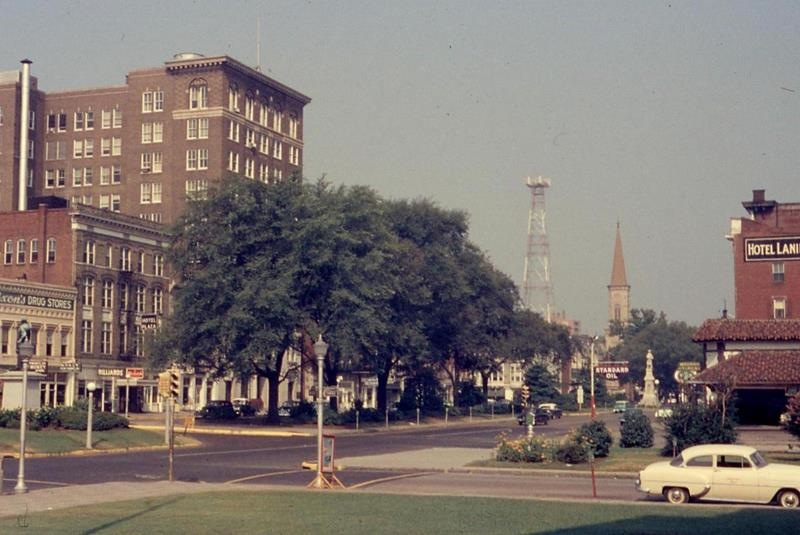 One block away from our laundry was the main business street, Cherry.  There were the 5 and 10 cent stores like Kress, Woolworth, and J. J. Newberry where many toys could be found.  At one end was the Ritz Theatre where they showed many western movies.  On Saturdays, George loved to go with or without his big brother to see a double feature cowboy show with Hopalong Cassidy, Durango Kid, Lash LaRue, Tex Ritter, Gene Autry, Red Ryder, and similar B grade movies with cartoons and serialized shows like Superman or Dick Tracy.

George also liked to go to the Grand Theater, Bibb Theater, and Capitol Theater especially in the hot summer because they were air conditioned. 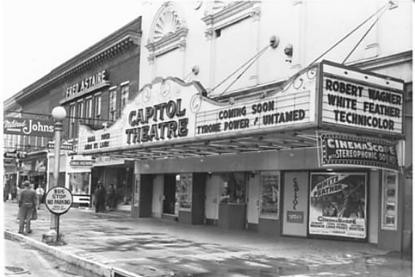 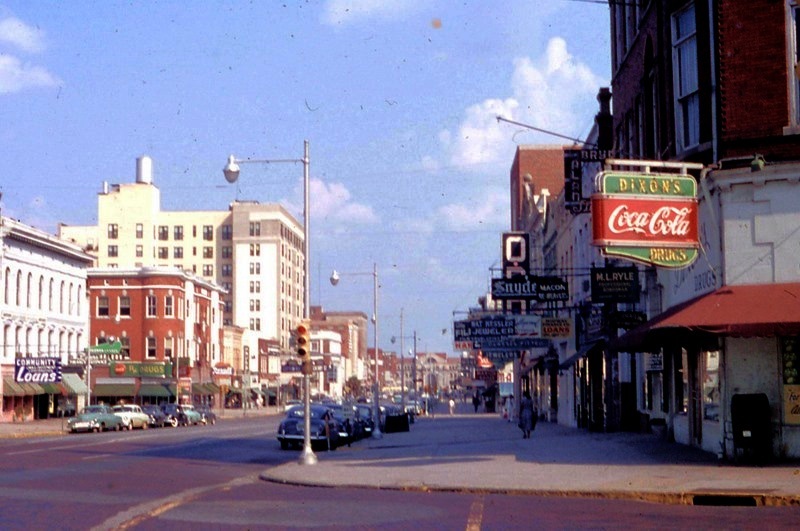 George had two older sisters, Mary and Jean, and an older brother, John.  We all helped out in the laundry.  Geprge did not like to work in the laundry and wanted to go to the picture show theater to see cowboy movies. On the busiest day, Saturday, George would sneak off and end up in the Ritz Theater to watch a double feature of B westerns. When his brother John would get permission to go up and down the aisle looking for him, George cleverly ducked his head so that he would not be detected and sent home to work.

It was easy to get around downtown Macon on foot so George often took off on his own from the laundry to visit different stores and make friends with other children in the neighborhood.  He even would sneak into the only  the Douglas theater, the one in town that allowed admission to "Colored People."

When George was about 6 or 7, he and brother John had the chore of dusting the shelves in the laundry where we stacked the wrapped packages of finished laundry for customers to pick up.  These two rows of shelves were about 6 feet across, and since they occupied the center of the store, laundry packages could be stacked on either the left or right hand side of the store. These shelves were suspended from the ceiling at a level that an adult could easily reach to place or retrieve packages.

Starting just behind the front counter where customers waited for service, these shelves extended into the store about 15 feet back to the area when father would wrap each customer’s assembled package of laundry in brown wrapping paper.  George and John would scamper up over the sorting table used during the week to assemble the laundry for each customer and climb up into the shelving area.   The brothers had a game, especially in the summer, of turning on the two large circulating fans that hung from the ceiling in the front of the store above the front counter. We could then pretend we were flying a B-29 on bombing missions over Japan in World War II.  Usually older brother John would pilot, and George would be the co-pilot.  We might also let one person pilot alone while the other would crawl to the back of the shelf assembly and  pretend to be the bombardier or rear gunner.

They ignored the fact that the engines of the plane, the electric fans, were actually not physically attached  to  their ‘plane’ but actually were about six feet in front of the shelving as well as facing toward rather than away from us.  It was better to be cooled by the fans blowing in their faces rather than have the more realistic arrangement of the fans blowing in the forward direction away from them.

Somehow during this game, they managed to find time to take feather dusters and clean the shelves.  They also had to find time to move the unclaimed laundry packages which were scattered in different sections of the shelving from their location so they would be bunched together in the front so that there would be space for stacking next week’s laundry when it was finished. 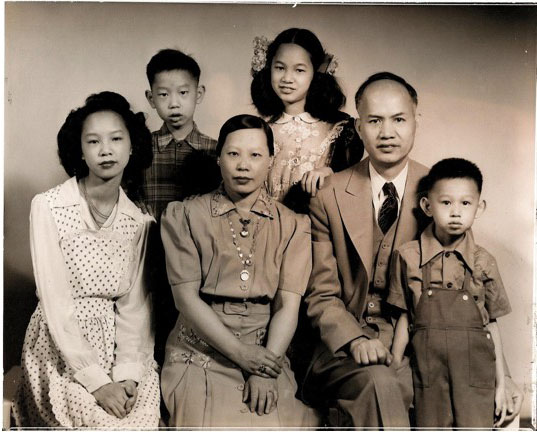 George had problems at school and did not do well learning at school. He was also difficult for teachers to discipline.Soon George was told by the principal to stay away from the school. Apparently, on one occasion he accidentally hit another boy in the eye. [Over 50 years later, his brother John met a man during a visit to Macon who told him that he was the one that George hit.  He bore no grudge and later when this incident was reported to George he could not recall the incident but nonetheless was embarrassed and apologetic]

George often played with his brother John and one of his sisters, Jean, in back yard of the church directly behind our laundry.   We pretended it was a castle and it was a great place to play hide and go seek, among other games. The entrance to the church resembled a courtyard to the children. front 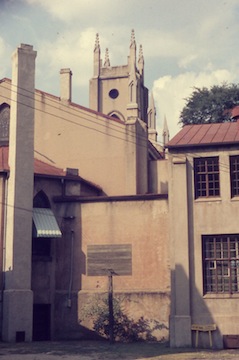 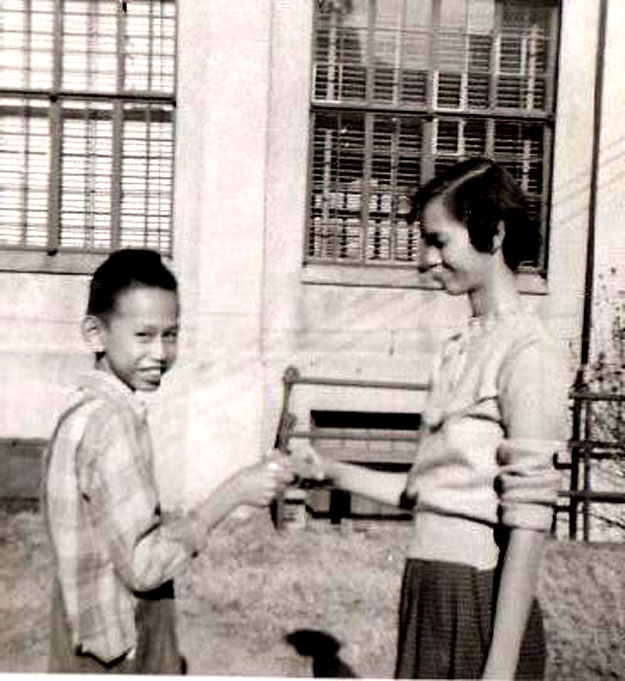 George and John would play cowboys and indians with some other kids.  John loved sports and he tried to entice, cajole, or bribe George to play baseball, football, and basketball with him, but George was not interested in or good at sports. 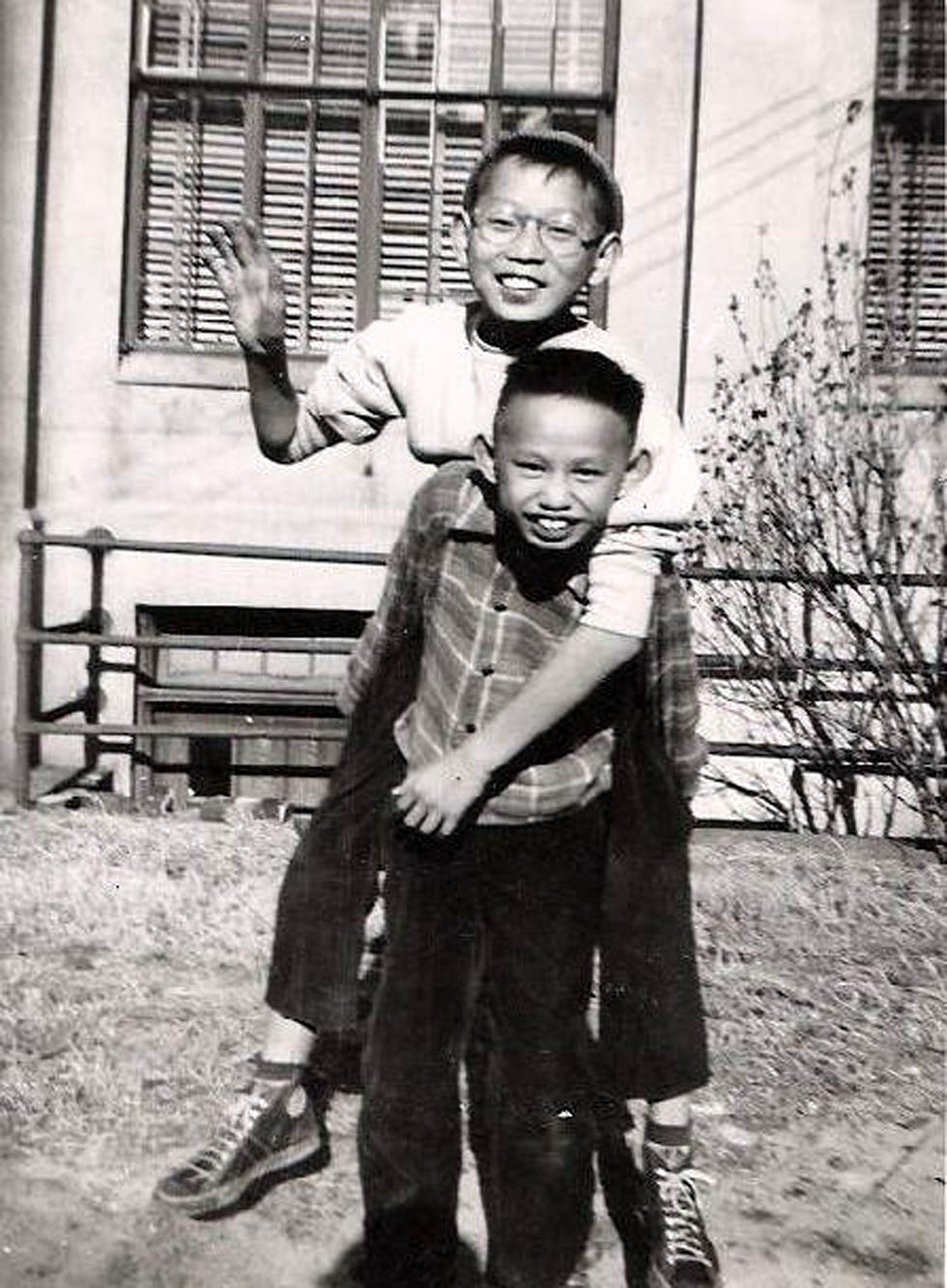 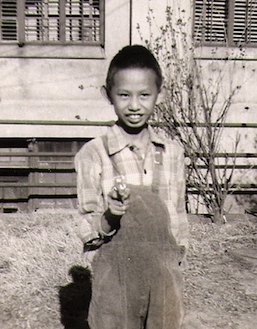 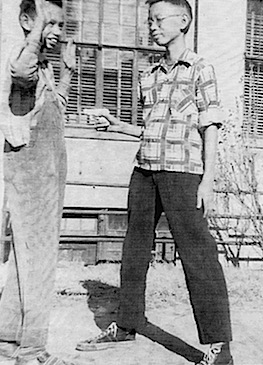